Passion for Speed puts you behind the wheel of some of the greatest sports and racing cars of all time. This is the fully revised and updated third edition of the book previously published as Into The Red. 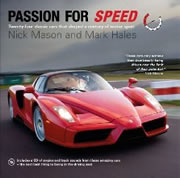 Back in 1984, writer and racer Mark Hales and musician and arch-enthusiast Nick Mason had a similar idea for a book about the latter’s car collection and both were insistent that it had to be something that had never been done before. A properly competitive track test of 22 of the man’s cars, combined with an intimate insight into the joy and frustration of purchase and ownership from their owner. It took three years to create the original Into The Red. Beautifully illustrated with some superb action photography, it turned out exactly as they wanted, capturing perfectly the power the exhilaration and the feel of cars which were driven by some of the world’s greatest racing drivers. The list is as diverse as it is impressive and what Ferenc Szisz might have experienced from the lofty perch of a 1901 Panhard may be less dramatic than that available from a Porsche 962 in 1990 but it is no less interesting and certainly no less exclusive.

A second edition of the book was published in 2004, including the McLaren F1GTR.

Passion for Speed is an extended and updated edition of that work, which now features 25 cars and includes those unique and exclusive rides in the passenger seat round Silverstone’s South circuit. Passion for Speed includes two new cars – the powerhouse Ferrari Enzo from 2003, and the elegant little Alfa TZ of 1964 – both driven as hard as they would go over the sweeps and turns of the picturesque Anglesey Circuit in North Wales.

Some of Into the Red’s subjects are still incredibly fast: the powerhouse Porsche 935 turbo of 1978, the limited edition 6-litre McLaren F1 of 1995. Some extremely rare: the legendary V16 BRM of 1953 is one of only three known to exist. Some unfeasibly expensive: the 1962 Ferrari 250GTO had a value of £10 million at its peak during the profligate late ‘80s. And others are all-time classics, including the Bugatti T35B of 1927, the Maserati 250F of 1957, and the Ferrari 312T3 that carried Canadian Gilles Villeneuve to victory in his home Grand Prix in 1978.

The Ferrari Enzo which light up the cover of Passion for Speed was Ferrari’s attempt to off Formula One levels of engineering and downforce to an exclusively well heeled few. The Alfa TZ did a little of that but line with the technology of the 1960s and on a smaller scale. It offered amateurs the machinery to compete in all the great races including Le Mans. Nick’s car is powered by an engine of just 1600cc but in 1964, it finished 11th overall at the great race driven by two Italian amateur drivers.

Mark Hales details the distinctive sensations, sounds and vibrations of each car’s progress, down to the feel of the wheel, the snick of the gears and the response of the brakes. Nick Mason gives a personal view of the history and heritage of each model, together with a witty and self-deprecating inside account of the ups and downs of collecting classic cars.

And just as there was for the original edition, there is a CD of the distinctive engine sounds of each car to add to the experience. It provides a unique additional sense of what it is to experience these cars. Once heard, the sound of a BRM V16 is never forgotten…

This third edition is now available from Carlton Books. Signed copies are available from Into the Red Films (visit www.intotheredfilms.com) or Contact Mark direct.

Mark also has a small number of Limited Editions of the original book still available. These are from the original 1997 batch and are personalised with leather jacket and individual, numbered chassis plate. Signed by both authors and complete with extra notes inside. Contact Mark for details.